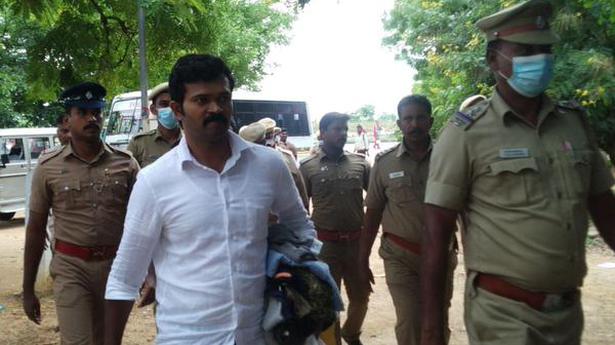 ‘Saattai’ Duraimurugan, also a YouTuber, spoke at a demonstration organised by the party in Kanniyakumari district recently

YouTuber ‘Saattai’ Duraimurugan, who is also a functionary of Naam Thamizhar Katchi, has been arrested and remanded in judicial custody till October 25 on various charges, including speaking ill of the Chief Minister and the State government during a demonstration organised by the party at Thuckalay in Kanniyakumari district recently.

The demonstration was held to oppose mining of sand and stones in Tirunelveli and Kanniyakumari districts and transporting the minerals to Kerala.

The First Information Report registered by Thuckalay police said the NTK functionary incited violence. The police booked him under Sections 143 (unlawful assembly), 153 (Wantonly giving provocation with intent to cause riot), 153A (indulge in wanton vilification or attacks upon the religion, race, place of birth, residence, language etc of any particular group or class or upon the founders and prophets of a religion), 505 (2) (506 (1) (criminal intimidation) and 269 (Whoever unlawfully or negligently does any act which is, and which he knows or has reason to believe to be, likely to spread the infection of any disease dangerous to life) of the Indian Penal Code.

Mr. Duraimurugan was staying at a party functionary’s bungalow in Tirunelveli city on Sunday night when the police arrested him and subsequently lodged him in Nanguneri sub-jail.