No COVID-19 death in Chennai for the third day 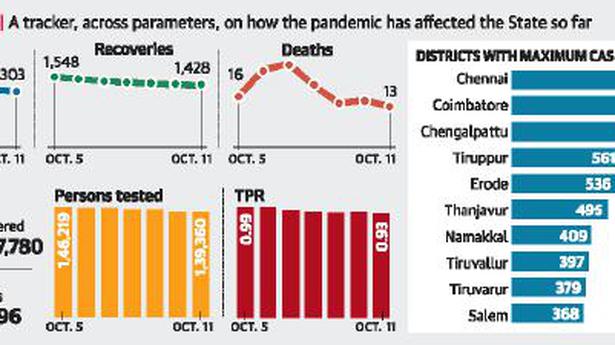 On Monday, for the third day in a row, Chennai recorded no death due to COVID-19. Apart from Chennai, 27 districts reported no fatality, even as 13 more people succumbed to the infection across the State, taking the toll to 35,796.

Of these, Chennai recorded 168 cases, followed by Coimbatore with 128. There were 98 cases in Chengalpattu, while Tiruppur recorded 87. In Erode, 75 people tested positive, while Thanajvur recorded 60 cases and Tiruvallur 58. Namakkal and Salem logged 57 and 52 cases respectively.

Seven districts saw fewer than 10 cases each. Perambalur had the least number of cases at just two.

Of the 13 fatalities, Coimbatore accounted for four. There was one death each in Chengalpattu, Dindigul, Mayiladuthurai, Nagapattinam, Perambalur, Salem, Tiruvallur, Tiruvarur and Tiruchi. All 13 of the deceased had co-morbidities.