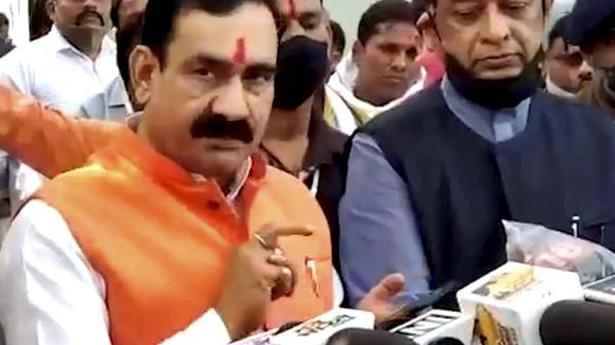 The Madhya Pradesh’s Ujjain and Indore Police have lodged cases against a woman and five persons for two instances of ‘hurting Hindu sentiments’. Both incidents have taken place in State’s Malwa region, considered to be communally sensitive.

In the first incident, an FIR was lodged against a woman following a complaint from the State’s Home Minister.

“Stern action will be taken against people for releasing videos shot at religious places that hurt religious sentiments. In context to a video released by a woman shot in the premises of Ujjain’s Mahakaleswar temple premises, I have asked the Ujjain Superintendent Of Police to lodge an FIR against the woman,” tweeted Home Minister Dr. Narottam Mishra.

However, upset with a video being shot at the temple premises, the priests lodged a complaint with the State’s administration officials of Ujjain demanding action against the woman and calling for a ban on women’s entry into the temple.

Despite several attempts, the Ujjain Police is yet to confirm in which Police station the FIR will be lodged against the woman who has posted her video shot at the Mahakaleshwar temple premises.

In the second incident, cases against four non-Hindu youths and an organiser of Garba event were lodged following intervention of the members of Vishwa Hindu Parishad (VHP) and Bajrang Dal in the commercial capital of the State — Indore — on Sunday night.

The members of the two outfits created ruckus at a Garba dance for promoting anti-Hindu activities and alleging that the event was promoting Love-Jihad.

Stopping the Garba dance being organized at Oxford College under Gandhi Nagar police station area, the members of the two outfits alleged that participation of people from other religions is not acceptable in a Hindu event.

The Gandhi Nagar Police has lodged an FIR against four persons and the organiser of the event, an official told The Hindu.