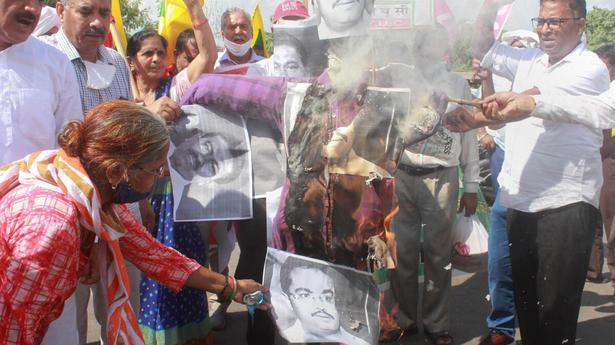 The Samyukt Kisan Morcha’s deadline for its demands that Minister of State for Home Ajay Mishra be sacked and arrested for his alleged involvement in the deaths of farmers at Lakhimpur Kheri ran out on Monday. As hundreds of farmers pour into the region for the last rites of the victims on Tuesday, the protesting unions plan to go ahead with an intensified agitation including kalash yatra, rail roko and mass rally in Lucknow later this month.

Minister’s son Ashish Mishra was arrested over the weekend and remanded to three days police custody on Monday, but no action has been taken against the Minister himself.

The SKM accused the Minister of seeking to promote enmity, hatred and disharmony against minority Sikhs of the Terai region in a speech on September 25.

“His speech was of intimidation and threat, in a public meeting at that, where he was also proudly alluding to his criminal antecedents, and on the basis of this, stern action should have taken place by now, which could have prevented the entire episode of Lakhimpur Kheri massacre,” said an SKM statement, adding that Mr. Mishra owned the vehicles which ran over the farmers and had attempted to protect his son from arrest. “It is clear that his continuation as a Minister in the Union Council of Ministers can be construed only as Narendra Modi’s harbouring of criminals,” it added.