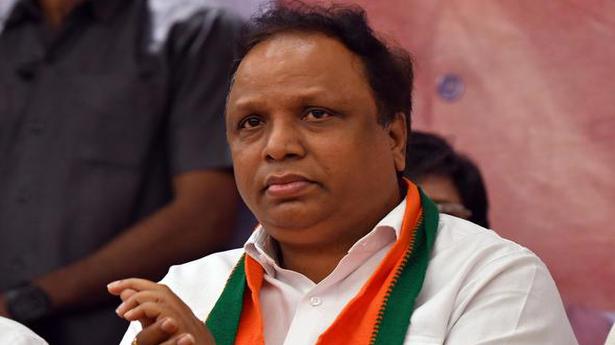 While the Maharashtra bandh called by the tripartite Maha Vikas Aghadi (MVA) of the Shiv Sena, the Nationalist Congress Party (NCP) and the Congress on Monday generally received support from all sections of society, Opposition Bharatiya Janata Party (BJP) and the Raj Thackeray-led Maharashtra Navnirman Sena (MNS) questioned the MVA’s “double-standards” in imposing the shutdown on farmers, traders and businessmen limping back to normalcy after successive pandemic-induced lockdowns.

Censuring the Uddhav Thackeray-led Maharashtra government for “forcibly imposing” the shutdown, MNS general secretary Sandeep Deshpande questioned as to why the Sena MPs had not protested vigorously at the time when the ‘anti-farmer laws’ were being passed in Parliament.

“The question of supporting or opposing the shutdown comes later… When this supposedly ‘anti-farmer’ Bill was being taken up for debate in Parliament, why was [NCP chief] Sharad Pawar not present? Why were the Shiv Sena leaders silent?” said Mr. Deshpande.

The MNS leader further pointed to the ‘inherent hypocrisy’ of the relations between Mr. Pawar and Prime Minister Narendra Modi.

“When Mr. Pawar goes to Delhi, he says his relations with the Prime Minister are cordial…now, his party, which is in power in the State, forces a lockdown to protest against what the BJP government in another state reportedly did against its farmers. While the Lakhimpur Kheri violence is condemnable, were there protests in Uttar Pradesh when the NCP leaders ordered firing on farmers protesting against land acquisition in Maval [in Pune district] 10 years ago?” said Mr. Deshpande.

Hitting out at the MVA’s forcible shutdown of traders, senior BJP leader and former Maharashtra Minister Ashish Shelar launched a broadside against the Shiv Sena and the NCP, accusing the parties of having made “a business of shutdowns and extortions.”

“Remember the history of these ‘emperors’ of shutdowns [the Shiv Sena], the ones who offered covert support to mill workers while finishing off their unions, which led to hard working workers being driven out of factories,” said Mr. Shelar, lashing out against the BJP’s estranged saffron partner.

Calling the Sena “a regressive party”, Mr. Shelar said that it opposed everything for the sake of opposing — from the Mumbai Metro car shed to the Chipi Airport.

Meanwhile, while the Brihanmumbai Electric Supply and Transport (BEST) services remained shut for fear for vandalism, State transport buses plied in various districts in the State. Local train services resumed as usual in Mumbai city while several taxis, too, continued plying despite the shutdown.

Eight BEST buses were damaged by unknown persons who pelted stones on them early on Monday.

Despite the massive economic loss endured during the prolonged lockdowns, traders’ association in Mumbai and Pune cities nevertheless extended their support to the MVA’s shutdown.

Viren Shah, chief of the Mumbai-based Federation of Retail Traders’ Welfare Association (FRTWA), said that traders had decided to keep shops closed till 4 p.m. in support of the bandh at the request of the Shiv Sena leaders.

Earlier, the FRTWA had opposed the shutdown, citing the huge losses endured in the past 18 months due to lockdowns.

“Our business is slowly picking up. In middle of the festival season when customers have started coming out to shop, let us do our business peacefully. We appeal to the government to allow retail businesses to remain open,” Mr. Shah had earlier said, only to backtrack on his statement on Sunday.

Fatehchand Ranka of Federation of Traders’ Associations of Pune, said that despite the massive losses suffered by traders owing to the prolonged disruption of business caused by the pandemic, traders had agreed to observe the bandh till 3 p.m. in Pune city.

Agricultural produce market committees (APMCs) generally remained shut across the State, though the Solapur APMC said it would keep the market yard shut only between 9 a.m. and 12 p.m. instead of 4 p.m.

There were minor disturbances during protests throughout the State: in Kolhapur, some Shiv Sainik activists were taken into custody for blocking the national highway for nearly half-an hour.

Members of the Yuva Sena, at the forefront of agitations against the Lakhimpur Kheri violence, burnt tyres in Malshiras in Solapur burnt and raised slogans against Ashish Mishra, the son of Union Minister of State for Home Ajay Mishra.

There was heavy police deployment during the shutdown, with companies of the State Reserve Police Force, the Home Guard personnel and Local Arms Unit pressed into action to preclude untoward incidents.

Vegetable vendors in most districts in both the rural and urban pockets went about with their businesses, though in Mumbai vendors promised to keep businesses closed after 10 a.m.