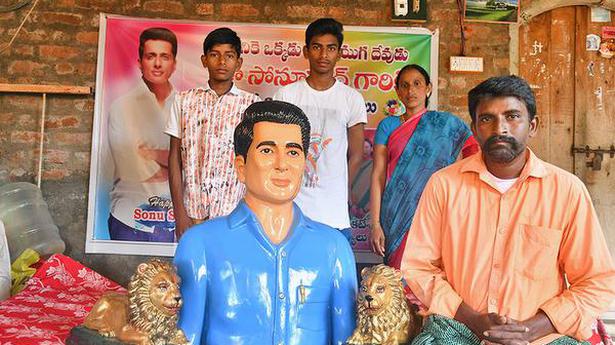 “He played negative roles in most of his films but proved a true hero in real-life during the challenging times.”

Noted film actor and philanthropist Sonu Sood’s multifarious acts of kindness during the COVID-19-induced lockdown last year and thereafter continue to inspire his staunch admirers to show their admiration for his humanitarian gestures through the medium of art.

Gurram Venkateshwarlu, a 38-year-old farm labourer of Garlapadu village in Bonakal mandal, adores the multilingual actor as a “real-life hero” for helping thousands of migrant workers reach their homes during the mass exodus of labourers from various cities to their villages triggered by sudden imposition of lockdown to stave off coronavirus infection last year.

Inspired by Mr Sood’s consistent acts of charity, Venkateshwarlu, who ekes out a living by toiling in agricultural fields to support his family, brought an impressive statue of Mr Sonu Sood made by a famous sculptor of Gollapudi village in neighbouring Andhra Pradesh’s Krishna district recently.

He had spent a portion of his hard-earned money on the statue for installing it in his village to foster the spirit of compassion.

“I have seen several of Mr Sood’s Telugu films including Ashok,” says Venkateshwarlu, praising the acting talents of Mr Sood.

“He played negative roles in most of his films but proved a true hero in real-life during the challenging times,” he notes.

Mr Sood extended a helping hand to thousands of migrant workers and provided medical oxygen to many critically-ill COVID-19 patients during the critical times, he extols.

The village sarpanch and several other local body representatives have extended their support to ‘my endeavour to install the statue of the real-hero in our village to inspire youth to emulate his humanitarian gestures and help those in distress around their neighbourhood’, Mr Venkateshwarlu asserts, unveiling his plan to install the statue soon.