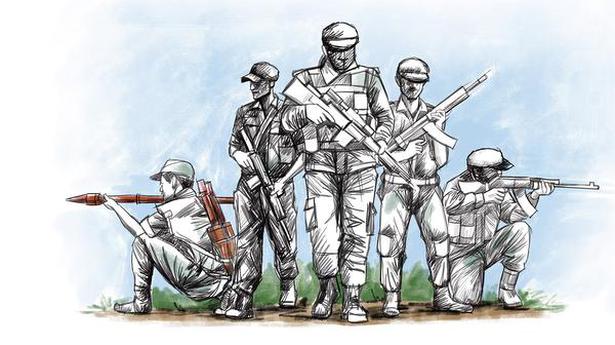 The militants,who were in Bongbal Khullen village in Imphal East district, reportedly opened fire at the personnel who retaliated.

At least four Kuki tribal insurgents were killed and four rifles recovered in an encounter in Imphal East district. Personnel of the 21 Para Special Forces rushed to Bongbal Khullen village on Sunday following information about the presence of some armed militants. The militants reportedly opened fire at the personnel who retaliated. Once the firings, which lasted more than one hour, ended the personnel recovered four bodies and three AK series rifles, one HK rifle, magazines and ammunition.

Since there is no road for vehicles, the police from the Maphou Dam police station had to walk and it was only on Sunday night that they could reach the encounter site. Efforts are on to bring the bodies in litters with the help of local volunteers.

The dead militants are believed to be members of the Kuki National Liberation Army. It had refused to sign a peace pact and come overground for talks.