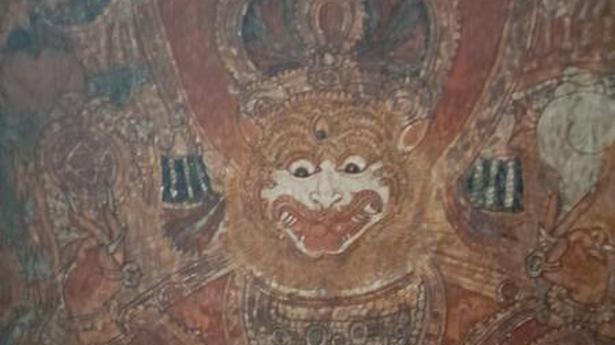 Restoration and conservation of mural paintings on the outside walls of sanctum sanctorum of the Adikesavaperumal temple in Thiruvattaru in Kanniyakumari district is in limbo after the work was stopped in the wake of objections from the public.

The temple, one of the 108 Vaishnavite Divya desams, is being readied for Kumbabishekam after a gap of over 400 years and the Hindu Religious and Charitable Endowments (HR&CE) department has completed 80% of the work.

But what comes in the way of fixing a date for kumbabhisekam is uncertainty over restoration and conservation of murals. The public made a demand for brightening the colours of the paintings and complained to Awathi Thirunal Gouri Lakshmi Bayi, the princesses of Travancore, since Adikesavaperumal was the principal deity of Royal family till they changed their capital from Padmanabhapuram to Thiruvananthapuram.

“She took up the issue with the HR&CE higher officials and the work was stopped,” said a senior official of the department.

Subsequently, J. Kumaragurubaran, Commissioner, HR&CE, who visited the temple, assigned the task of studying the issue to K.U. Krishnakumar, Principal and Chief Instructor of Guruvayur Devaswom Institute of Mural Paintings.

He had also certified that the work had been executed as per the directions of Veeraraghavan, senior archaeologist and chemist with more than 25- year experience in traditional mural paintings.

Mr Krishnakumar had said the style, beauty and colour application of traditional Kerala Mural paintings could be witnessed in the temple.

Pointing out that the temple murals had a peculiar style, he had said restoration should be done without altering it.

“More care should be given in finishing styles, especially the final outlines. Being an experienced artist, it is better to be done by Unnikrishnan. Due care should be taken in the facial expression, eyes, lips, body postures and mudras,” Mr Krishnakumar had said in his report.

He also had suggested erection of steel rail around the walls at a distance of approximately between two and two and half feet to prevent devotees from applying sandal paste and oil on the wall. A similar arrangement could be made around the sanctum sanctorum of Thiruvambadi Krishna temple in the premises.

A.K. Perumal, the author of a book on the history of the temple, said the paintings were in perfect shape when the experts from the Travancore Archaeology department studied the murals in 1934. “When they visited again in 1938, they witnessed the colours fading. Chemical analysis indicated excess presence of lime in the paste used for plastering the walls,” he cited the report as saying in his book.