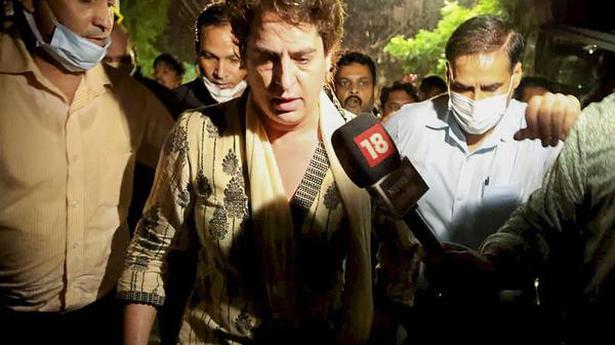 Vadra, Rahul ‘only leaders’ who could provide an alternative to the BJP, says Shiv Sena MP

In his weekly column Rokhthok in the Sena’s mouthpiece Saamana, Mr. Raut said one could see shades of Indira in Ms. Vadra’s actions in Lakhimpur Kheri where the Congress leader had ‘exposed’ an “attempted cover-up” of the violence.

“The whole country has been galvanised by Priyanka Gandhi’s illegal detention at Lakhimpur Kheri and her doughty resistance to the BJP Government in Uttar Pradesh…On the morning of October 4, one could see the spirit of Indira Gandhi in her granddaughter, and as long as that spirit is alive, one can be sure that the flame of democracy is alive as well,” said the Sena MP, remarking that it was unfortunate that Rajiv Gandhi’s daughter had to battle police in this manner in the wee hours of the day.

Mr. Raut also said Ms. Vadra and her brother, former Congress president Rahul Gandhi, were the “only leaders” who could provide an alternative to the BJP at the Centre today. The Sena shares power with the Congress and Sharad Pawar’s Nationalist Congress Party (NCP) in Maharashtra.

“Even [Prime Minister] Narendra Modi and Home Minister Amit Shah sense this…hence, they want the Congress to remain weak. However, there is a difference between the BJP wishing the Congress to stay weak and other Opposition parties [read the TMC and the AAP] wanting the same. The overwhelming support that Ms. Vadra received after her detention in Lakhimpur Kheri is proof that it is not so easy to finish off the Gandhi family,” said the Sena leader.

“At the time [in 1977], a united Opposition which did not want the Congress came together and defeated it. But today, there is neither any Jayaprakash Narayan nor any George Fernandes. So, it is surprising that a divided Opposition should wish to weaken the Congress,” he said, dismissing the TMC and the AAP as spoilsports bent upon weakening the Congress.

Mr. Raut, who earlier this week had met Mr. Gandhi in Delhi to strategise on taking on the BJP, said the Congress leader was committed to fighting the Narendra Modi-led Central Government.

The Sena leader’s newfangled admiration for the Gandhi family is in stark contrast with his disparaging remarks in the recent past against the Congress party. In June, an editorial in the Saamana (where Mr. Raut is executive editor) had slammed Mr. Gandhi for “failing to provide effective leadership to his party and the United Progressive Alliance” (UPA), while speaking of Mr. Modi and the BJP in grudgingly admiring tones.

The BJP pounced on Mr. Raut’s affinity with the Congress, with MLC Gopichand Padalkar wryly commenting that the Sena spokesperson seemed intent on ‘merging’ the Shiv Sena — founded by the late Bal Thackeray on the basis of ‘Hindutva’ — with the ideologically opposed Congress party.