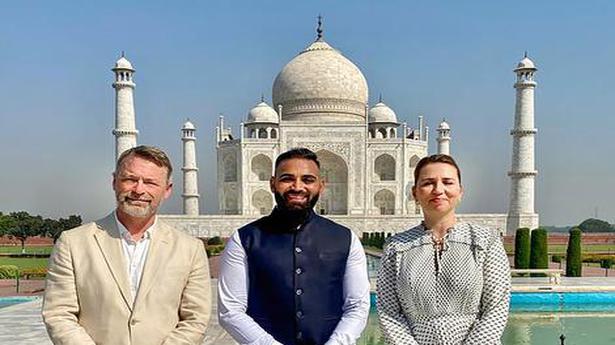 The Danish Prime Minister is on her first state visit to India.

Denmark Prime Minister Mette Frederiksen and her husband Bo Tengberg visited the Taj Mahal on Sunday morning and described it as a beautiful place.

Ms. Frederiksen had landed at Airforce Station in Agra around 8.30 pm on Saturday. She was received there by Uttar Pradesh Energy Minister Kant Sharma, who was accompanied by officials from the city and police administration.

On Sunday morning, the Danish PM, her husband and a delegation arrived at the Taj Mahal in eco-friendly vehicles. There the guests were welcomed by local artists of the ‘Braj’.

Ms. Frederiksen spent one-and-a-half hours inside the Taj Mahal with her husband and took interest in the history of the monument explained by the tour guide.

In the visitors’ book, Ms. Frederiksen expressed thanks and said “this place is beautiful”.

After the Taj Mahal, the Prime Minister visited the Agra Fort.

During the VVIP visit, Taj Mahal and Agra Fort were closed for two hours, according to an order of the Archaeological Survey of India, Agra Circle.

The Danish Prime Minister is on her first state visit to India. She arrived in the national capital on Saturday and met Prime Minister Narendra Modi.

Aged 43 now, Ms. Frederiksen became the youngest woman Prime Minister in Danish history when she was elected to the post in 2019 —and only second woman ever to hold the post.