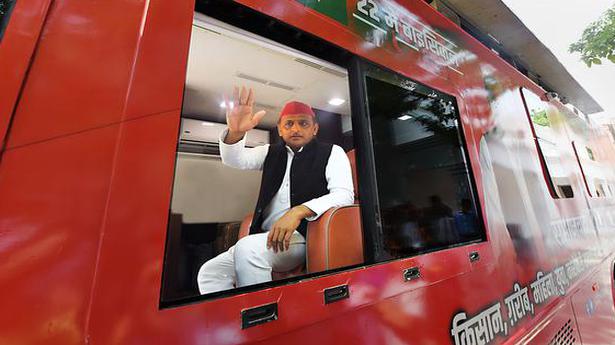 Launching the Samajwadi Party’s (SP) poll campaign, party president Akhilesh Yadav said on Sunday that if the Bharatiya Janata Party (BJP) was not voted out, it would “trample upon the Constitution as it has mowed down [the demands] of farmers in the last one year”.

“The three farm laws came into being because the BJP won Uttar Pradesh,” he said, while addressing a massive rally in Saharanpur in western U.P. “It is not going to be an ordinary election. It will decide the destiny of the country, the future of the youth,” he emphasised.

Talking about the Lakhimpur Kheri violence, Mr. Yadav said “scriptures tell us that no arrogant ruler survived the wrath of the public”. He added that “no independent inquiry could happen until the father of the accused doesn’t vacate his post”.

The rally was organised in the Tintro area of the district to mark the birth centenary of the Samajwadi Party’s vice president and prominent farmer leader Yashpal Singh, who belonged to the Gurjar community. The location assumes significance as, after the Samrat Mihir Bhoj statue controversy, the community had shown ire towards the ruling party.

Mr. Yadav said the BJP government wanted to diminish the “Ganga-Jamuna identity” of the region. “I would like to thank the farmers’ movement for salvaging the syncretic character of the region despite being humiliated and called names. They have risen above the caste and religious identities to be just farmers,” he said.

Providing a sense of the alliance in the upcoming polls, Mr. Yadav recalled how the SP joined forces with Rashtriya Lok Dal to defeat the BJP in the Kairana Lok Sabha bypoll in 2018. “Our opponents asked us what kind of bond it was, I said it was a charismatic alliance,” he added.

Charging the BJP government with selling national assets to corporates, he said a day could come when the party would outsource governance as well.

Invoking the Bhagvad Gita and the teachings of Guru Nanak, Mr. Yadav took a dig at Chief Minister Yogi Adityananth with, “A yogi is that person who considers others’ pain as his. We have just seen the feat of the person who is sitting on a throne, with his acolytes in Lakhimpur, where farmers were mowed down. It was not just the farmers, they wanted to trample upon the law as well,” he said.

Claiming the days of the Yogi Adityanath government were numbered, he said the BJP should transfer him to neighbouring Uttarakhand, from where the U.P. CM originally hailed. “We have seen three Chief Ministers in the State [of Uttarakhand] in the last few months, why don’t you make a change once more?” he quipped.

He took on the Central Government on rising petrol-diesel prices, non-payment of sugarcane dues, raging unemployment, and unkept promises. “They promised to double the income of farmers but the reality is that farmers are unable to sell their produce at the MSP (minimum support price), electricity charges are skyrocketing, and even mustard oil has become unaffordable.” Referring to the PM Kisan Samman scheme, he said what poor farmers were getting was ₹500 a month. “Isn’t it a betrayal?” he asked.

Raising the issue of floating bodies in the Ganga, Mr. Yadav said the government had left the public to fend for themselves during the pandemic. “They [the government] could not arrange hospital beds and oxygen for the patients, and proper funeral facilities for the deceased,” he charged.