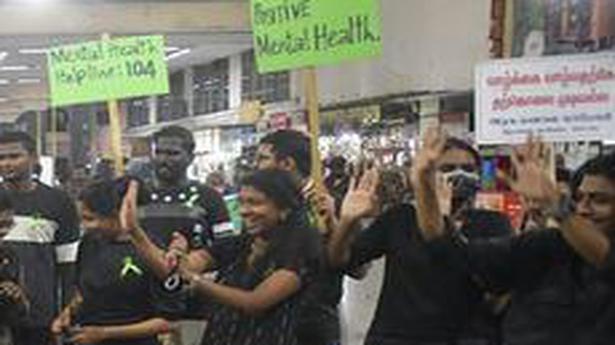 In line with the World Mental Health Day, the Institute of Mental Health (IMH) and The Candles, an NGO, conducted an awareness programme at Chennai Moffusil Bus Terminus, Koyambedu, on Saturday.

World Mental Health Day is being observed on October 10. This year, the theme is “Mental health in an unequal world”. A flash mob, skits and a talk on issues surrounding mental health were organised as part of the awareness programme to reach out to the public.

P. Poornachandrika, director of IMH, said the main focus of the programme was to reach out to public with information on what to do if they see a wandering mentally ill person. “We wanted to create awareness on this aspect as many do not know what to do if they come across a wandering mentally ill person. We distributed pamphlets to the public containing the helpline numbers of Greater Chennai Corporation, IMH and voluntary organisations. We told them that if wandering mentally ill persons are brought in, treatment can be initiated and they can be re-integrated,” she said. The aim was to reach out to all — both young and elderly — and hence, the programme was held at a public place such as CMBT, said Angelin Prince, director of The Candles, that works on health, mental health and menstrual hygiene. Student volunteers participated in the flash mob, while nurses of IMH staged a skit on suicide prevention and volunteers of the NGO staged a skit on mental health issues among families and students. The need to address mental health issues of women was also highlighted, she said.