‘We are trying to shake the deep-rooted agenda of BJP’ 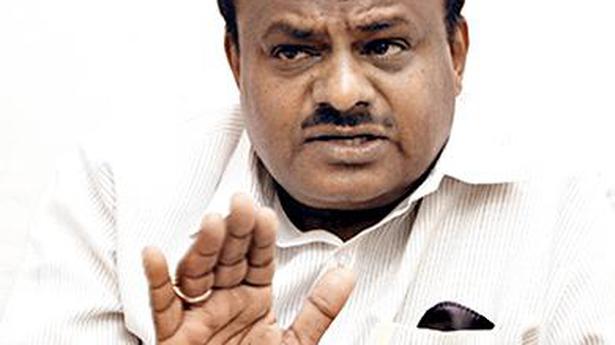 In the eye of the storm over his comment that the country and the State are in the grip of the RSS, former Chief Minister and JD(S) leader H.D. Kumaraswamy on Wednesday insisted that his articulations came from his deep study of the workings of the organisation and was not premeditated or with an eye on the bypolls, where his party has fielded two Muslim candidates. He said that it was also not aimed at deflecting the accusation that his party was working cahoots with the BJP as its “B team” to divide votes. Excerpts from the interview:

Why have your comments on RSS come at this point?

It was just a coincidence and nothing to do with the bypolls. I have been reading The RSS – The Deep Nation by Dinesh Narayanan the last week. It influenced my thought and I spoke out spontaneously. The RSS of the present is different from what it was 40 years ago.

Is it to change the perception that your party is BJP’s ‘B team’?

I am not concerned about being called the ‘B team’. My statement on RSS was not even meant to appease Muslims. RSS appeases Hindus and Congress appeases Muslims. As far as our party goes, there is no question of appeasing anyone. I spoke with concern about the democratic institutions in the country that is being systematically dismantled. Someone had to raise the issue, and I have belled the cat. Siddaramaiah equated RSS to Taliban. I have not done that.

You have fielded minority candidates in bypolls. It’s being seen as a ploy to divide the votes to benefit the BJP?

Congress ran false propaganda calling us BJP’s ‘B team’. We are struggling to tell the Muslim community that we are with them.

In the caste-dominated poll narrative, do you think Muslim candidates can win?

This is an experiment. Just by fielding minority candidates, I am not saying we will win or draw all minority votes. We want to create confidence among them. The Congress has damaged the community by keeping them as a vote bank. We want to create space for the minorities to take political decisions.

There are allegations of you going soft on BJP and this government. Is the assurance given to CM Basavaraj Bommai a pointer to that?

Assurance to Mr. Bommai was to prevent instability and elections in the light of COVID-19 and floods. That does not mean we will protect the BJP government. We are trying to shake the deep-rooted agenda of the BJP. The week-long workshop was to create awareness about the hidden agenda of the BJP among our workers and brainstorm on how to tackle it politically.

Do you think the strategy will affect the party’s vote base?

Have I said I will give party tickets to Muslims in all 224 constituencies? I am trying to utilise opportunities where it is available.

There are rumours you may enter into a pre-poll alliance with anyone for 2023.

I can assure you 200% that we will not have pre-poll alliance with anyone. We will contest all 224 seats.

It’s a very crucial decision that is yet to be taken. I am assessing possible damage to our party in future. The Muslim councillors in our party are opposed to tie-up with the Congress. The perception of the public about the BJP government is not good. The Congress’s strategy is to push us towards BJP. I may ask councillors to decide locally.

Does JD(S) see a threat in Vokkaliga politics with D.K. Shivakumar as KPCC chief?

Mr. Shivakumar cannot become a Vokkaliga leader ever. It is an artificially-created narrative. He was made president to gain sympathy that he went to jail. Even the Congressmen are not sure of his leadership. There is no guarantee that Mr. Shivakumar will become the next Chief Minister. Why will Vokkaligas vote for Congress? H.D. Deve Gowda is the undisputed leader in the community.

There is a perception of a thaw between the families.

It is just a public perception. Mr. Shivakumar’s agenda is to finish me and the party off in Ramanagaram in 2023. In fact, contrary to public perception, he was responsible for the collapse of my government in 2019 along with Mr. Siddaramaiah.

What about those planning to quit the party?

Ultimately, whoever leaves the party stands no chance of winning. Three to four leaders may go. I am not anxious. It is true that some leaders in Vokkaliga belt were worried about their political future after Mr. Shivakumar’s elevation. However, there is confusion in Congress as to who will become the Chief Minister with a section pitching for Mr. Siddaramaiah and also for a Dalit Chief Minister.