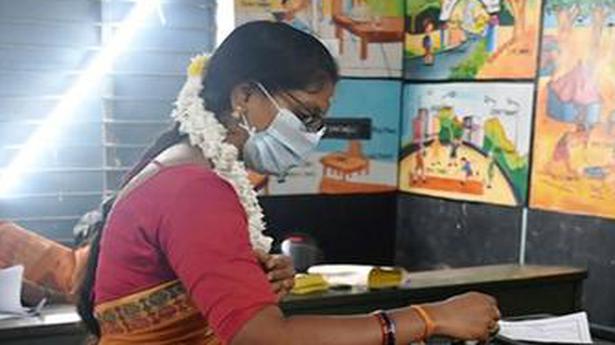 Vellore and Ranipet districts registered over 70% of polling in the first phase of rural local body elections on Wednesday. Tirupattur district recorded 62% polling.

In Vellore, the voter turnout was 73.50%. The district has 800 polling booths in Katpadi, Gudiyatham, K.V. Kuppam and Perambut panchayat unions.

Tirupattur that has a total population of 4,47,292 witnessed 62% voter turnout in its four blocks — Tirupattur, Natrampalli, Jolarpet and Kandali. The poll percentage was recorded at 5 p.m, according to respective district election officials.

Many of the 2,617 polling booths in these districts witnessed a steady flow of voters since 8 a.m. with residents waiting in a long queue to cast their votes in the booths in Gudiyatham, Katpadi and K.V. Kuppam in Vellore; Arcot and Walajah in Ranipet and Natrampalli and Jolarpet in Tirupatur. Most of the people followed COVID-19 safety norms before casting their votes.

In certain areas like Gudiyatham, the officials also provided face masks to voters. They were allowed only after thermal scanning was done. “As there was no rain, we ventured out to cast our votes. We were also excited to vote because we can highlight our demands directly to the local elected representatives,” S. Vanmathi, a voter from Arcot in Ranipet.

Election officials, especially in the polling booths, were provided with face masks, hand sanitisers and face shields. Adequate security arrangements — at least eight policemen including constables — were provided in each polling booth in these districts. Most of the booths had CCTV cameras. Wheelchairs were provided for senior citizens and persons with disabilities.

They wanted the panchayat to be renotified as unreserved or general category claiming that majority in the village were not Dalits and Scheduled Tribes.

As per records, of the total population of 1,701 persons in the Ammundi village, 284 persons are Dalits and 11 persons belong to ST community.

The Vellore District Election Officer, P. Kumaravel Pandian, who is also the Collector, tried to pacify residents and urged them to cast their votes but in vain.

In Tiruvannamalai, the elections will be held for as many as 35 posts including village panchayats and panchayat unions in 77 booths across the district on October 9.