One killed, 11 injured in RTC bus-car head-on collision at Manthani 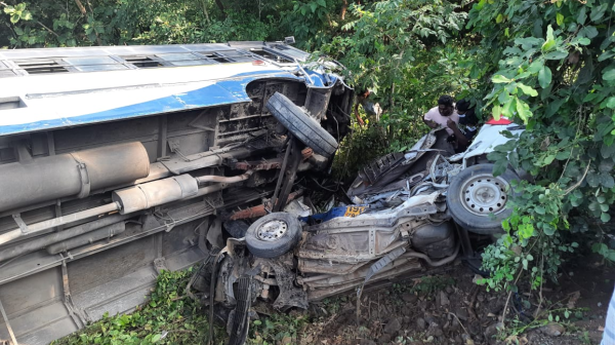 The bus had 16 commuters on board at the time of the accident.

A head-on collision between a car and a State-run RTC bus resulted in the death of a car driver, while 11 passengers suffered injuries near Eklaspur in Manthani Mandal of Peddapalli district on Wednesday morning.

Ramagundem Commissioner of Police S. Chandrasekhar Reddy said the accident took place around 8 a.m. when the car driver, Thati Vinith (22) from Khansaipet, suddenly turned his vehicle to the right, and to avoid hitting the bus driver veered off to left. The impact of the accident was such both the vehicles had a head-on collision and fell into a small gorge.

Police said that the bus, which belongs to Parakal depot, was going towards Hanumakonda from Bellampalli. While Vinith suffered severe injuries and died on the spot, the injured were shifted to Government Hospital, Manthani, for immediate medical assistance. The bus had 16 commuters on board at the time of the accident.

A case was registered and a probe is on. Police had engaged a crane to pull out the mangled vehicles from the gorge.