IPL 2021 | Super Kings will look to arrest the slump 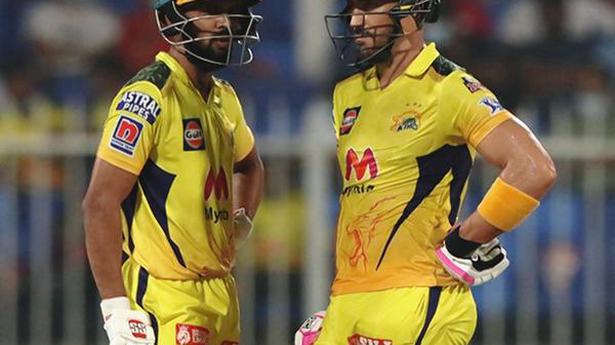 Winning is a lot about momentum. Particularly while entering the climactic phase of a high stakes competition.

After a stupendous run that saw it become the first team to qualify for the playoff, Chennai Super Kings (18 points from 13 matches) has suffered a slump of sorts, going down in its last two games.

Under the circumstances, M.S. Dhoni and his men will attempt to arrest the slump and get back on the highway to glory against Punjab Kings in its last game in Dubai on Thursday.

Punjab Kings (10 from 13) is a team that has discovered ways to lose from winning situations. Set batters have been unable to stay on and finish the job; the side has been consumed by the pressures of the chase.

Punjab Kings not just has to defeat CSK by a huge margin to get its run-rate above that of Kolkata Knight Riders and Mumbai Indians, but also hope both these sides lose their last matches.

CSK has named West Indies’ all-rounder Dominic Drakes as a replacement for all-rounder Sam Curran, ruled out with a lower-back injury. Drakes is a left-handed batsman and left-arm medium-pacer.

CSK CEO K.S. Viswanathan told The Hindu on Wednesday, “We have to pick one of the net bowlers with the various franchises. It will be a bubble to bubble transfer. There are pacemen such as Fidel Edwards and Ravi Rampaul available.”

Punjab Kings needs to get everything right in this clash. Anil Kumble’s men have shown some promise without getting all the pieces together. Young leg-spinner Ravi Bishnoi, left-arm seamer Arshdeep Singh and the hard-hitting Shahrukh Khan are all youngsters with talent.

Much focus will be on the in-form openers of both teams — Ruturaj Gaikwad and Faf du Plessis and K.L. Rahul and Mayank Agarwal.